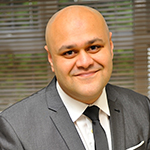 Ketan Makwana is a renowned international speaker and serial entrepreneur who has started, scaled a sold multiple businesses.

In a response to the emerging skills gap between education to employment and enterprise Ketan launched Enterprise Lab which is now operating in 11 countries training 100,000 people a year.

Ketan has experience in the IT, Electronics and Health sectors, having been responsible for European Distribution of Apple Products and Software in late 90’s into early 2000. He co-designed, developed and implemented the very first Electronic self-check in system & patient call systems into the NHS which are used in nearly 95% of all GP practices across the UK.. taking a business turning over £250k to £4.6m revenues within his own division.

Ketan also has expertise in launching products into the UK and European market – bringing the world’s smallest Dialysis machine into the UK in 2009 and setting up the European Distribution of a Kinesology Tape in 2010 which sold over 500,000 rolls in the first year.

In 2012 Ketan founded and delivered Youth Enterprise Live backed by the Prime Minister and the UK’s largest event focussed on Education, Employment and Enterprise for 15-30 year olds… leading on from this took a position as Special Advisor to the Prime Minster on Youth Policy; other work includes being part of the E20 Summit (20 entrepreneurs from the UK working on the missing millions) and has a seat in European Parliament & Commission working on the 2020 strategy for enterprise and employment.

Ketan is the Head of Operations at Rockstar Startup & Rockstar Hubs UK’s leading funding and mentoring organisation that has delivered £12m funding and supported over 2200 businesses in the UK.

Ketan is an advisor to UK Government on youth and enterprise policies, works with International Governments & Ministries on Enterprise Eco-System Development and sits on many advisory boards and panels… further work includes ambassador of UKTI and Foreign & Commonweath Offices related to Enterprise development in countries across the globe.

His specialities are in Operations and Strategy in supporting businesses to build efficient and effective structure within organisation for rapid growth, stability and success. He has a keen ear to understand your business issues and can support the visualisation and action of strategies.

As an entrepreneur Ketan has been awarded the Smarta 100 Award in 2012 for creating one of the most disruptive businesses in the UK, was finalist for Entrepreneur of Excellence at the National Diversity Awards and has supported many other businesses/entrepreneurs in achieving awards and recognition in their respective fields.